The Kid Stays in the Book 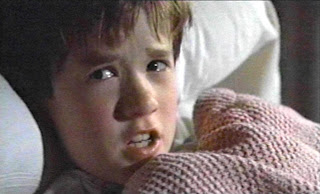 Tell me if this ever happens to you:

You're typing along, and you're hearing the voices in your head. It's a couple of your characters, chatting away. And you find your fingers flying just trying to keep up so you can record it all.

But sometimes -- and this doesn't happen very often -- I am typing away and I actually SEE people come onto the screen in my head. These are people I have not summoned, characters I have not accounted for, and it's like, wtf, who are you? You don't belong in this story. Somebody throw this bum off my set!

But they don't leave. They hang around. And they start whispering, "forget them, tell my story."

The first time I got visited by one of them was during the writing of our third book, "Thicker Than Water." This is a story about a dirtbag con who murdered a girl and twenty years later gets out of prison and kills his defense attorney. His son Ronnie hires our hero Louis Kincaid to clear his father's name. I was writing a scene in which Ronnie was talking to Louis and suddenly, in my head I heard the screech of air brakes. My fingers froze over the keyboard, but I said, okay...

So I wrote that Louis heard a school bus braking outside. A second later, a boy was in my head, whispering to me. But he was so sullen and closed, I couldn't hear what he was saying. I didn't like him. I almost ignored him. But then I gave in and wrote him into the scene. Suddenly, Ronnie had a son named Eric.

The kid hung around for 300 pages, moving in and out of the plot like a small ghost. I didn't have a friggin' clue why he was there except to make the dirtbag con, his grandfather, look even meaner. I kept wondering if Eric was just what I call a clutter-character, and that I needed to heed Elmore Leonard's famous advice to "cut out the stuff readers skip over." But I let Eric stay. Then, on page 363, Eric said something to me that changed the whole book. He said:

"Can a kid get in trouble for something he knows?"

Damn. It came together in a blinding flash, the whole key to the book. This kid was it. We had to go back and redo the bread-crumb trail of clues to make it work. But this kid held the final great twist of the plot in his hands. And without realizing it, for hundreds of pages, I had been giving Eric motivation and layers that set up everything for the ending. Or maybe Eric had been giving them to me.

I just have to learn to listen more carefully when they come a callin'.
Posted by PJ Parrish at 3:00 AM